Eurofyre would like to start this article off by offering our deepest condolences to those affected by the Grenfell tragedy. If you too would like to show support you can do so here.

On the 14th June 2017, a fire broke out at Grenfell Tower in the early hours of the morning. Grenfell Tower is a highrise building made up of 24 storeys, 120 flats and hundreds of residents, located in North Kensington, West London. Once the fire broke out, on what is believed to be the fourth floor, residents had to alert neighbours as no alarms were raised and a fire detection system was not believed to be in place. 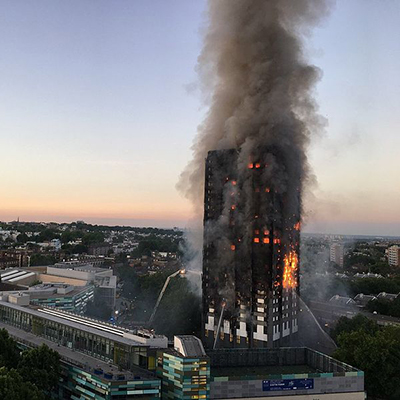 Firefighters arrived at the scene just 6 minutes after the first call came through, over 40 appliances and 200 firefighters were sent to tackle the blaze and firefighters managed to rescue over 60 residents.

Due to the severity of the fire, a number of fatalities occurred, over 70 people were injured and taken to hospital, many of whom were critically ill, and all residents have been declared as homeless.

Nearby homes and buildings were evacuated as a result of falling debris, local roads were closed and there was a high chance the building was going to collapse, though fortunately it did not. The fire was eventually put under control around 9 hours after the outbreak.

What Caused the Fire?

Firefighters are still working tirelessly to investigate the cause of the fire, however, they have not yet discovered what started the inferno, although it is believed poor conditions of the newly renovated building could have played a key role in the cause and spread of the fire.

Landlords or property owners must have reliable fire detection systems in place throughout the entirety of the building and in all flats/apartments in order to alert residents a fire has occurred, allowing them to carry out effective safety procedures to keep themselves safe.

Owners of high rise buildings must ensure regular risk assessments are carried out in order to evaluate potential risks and come up with a plan to eliminate or lower the risk of fire. Fire risk assessments allow you to:

When a new tenant moves in, it is of utmost importance that you make them aware of where all fire exits and safety routes are, and what they should do if they are unable to reach them. This means if a fire is to occur, they are aware of where to turn to and can leave the building as safely as possible.

Most fire services offer home visits to evaluate your home or building , offer expert advice based on the type of building and number of residents it holds and ensure appropriate action takes place to lower the risk of fire.

Fire crews may also make suggestions such as moving furniture or other items and will help you make those changes to your building.

Clear escape routes must be presented to all residents and should not contain any flammable materials like boxes or cardboard and any other sources of fuel such as oil.

Suitable fire doors are also essential in high rise buildings as they will help minimise the spread of fire. Fire doors are highly fire resistant and, therefore, heighten the chance of emergency services arriving at the scene before the fire reaches or harms residents in the area affected.

If you are worried about fire safety in your apartment building or to discuss any of Eurofyre’s products further, please don’t hesitate to contact Eurofyre on +44 (0)1329 835024 or by email to info@eurofyre.co.uk.