Cold storage areas that are typically used to store food that is either frozen (sub-zero) or chilled are considered to be high risk when it comes to fire protection measures. The combustible nature of materials stored within refrigerated environments, combined with the very dry high-airflow, creates a significant fire risk. A fire will spread rapidly between highly packed combustible materials such as cardboard and plastic packaging, grease impregnated materials, foodstuffs and wooden pallets, therefore, the earlier a fire can be detected the better. 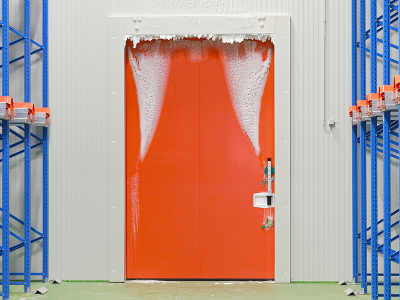 The short-lived nature of goods such as food makes it essential to avoid any rise in temperature. Heat from a fire or a rise in temperature due to unplanned cooling plant down-time following a fire will lead to stock damage/spoilage and hence a loss of revenue. Foodstuffs exposed to the incipient stages of a fire can also result in significant losses if not detected and managed early enough in these environments, as stock exposed to low levels of smoke over an extended period of time will quickly become contaminated and therefore unfit for human consumption.

Fire risks within a cold storage areas commonly arise from the following:

In summary, the very early warning capabilities provided by an aspirated smoke detector means they are able to detect the early stages of a fire, dramatically reducing the potential for business disruption, asset damage and hazards to personnel.

Aspirating smoke detectors provide pro-active detection at harsh temperatures by actively sampling air from a protected area via multiple sampling holes in a pipe network. The air sample is then transported to an externally located smoke detector to detect the presence of smoke.

Worldwide product and building standards often require the installation of smoke detection at ceiling level and also within associated ceiling void areas of the cold store, which often house refrigeration plant and electrical switchgear. By positioning an ASD outside the refrigerated area, the detector can be protected from sub-zero temperatures and will allow simple and easy maintenance to be carried out.

Eurofyre are available to assist at the design stage, to ensure optimum performance and system reliability.

For more information about the use of aspirating smoke detection in harsh environments such as cold storage areas, please contact us at sales@eurofyre.co.uk