Thatching is a very old roofing method that has been used in both temperate and tropical climates. Thatch roofs are built using dry vegetation such as straw, water reed, sedge, rushes or heather and are typically seen on old traditional cottages or heritage buildings. Other materials such as bamboo or palm leaves are also commonly used as thatching on roofs of tropical island resorts.

While thatch roofs are still widely used, they do not come without their fire risks. In June 2016 Oxfordshire County Council’s Fire and Rescue service were called to a fire that had taken hold of a thatched roof on a house in Great Haseley. By the time they arrived at the scene the fire had spread and had taken over 40% of the roof.

It took more than 50 firefighters to tackle the blaze from both inside and outside the the building. The firefighters employed a number of techniques, including a new technique to “cut the fire breaks” using chainsaws, to stop the fire from spreading.

Fire crews were forced to stay at the scene for a number of days to ensure that it was safe before anyone was granted access. Although no one was reported injured from the fire, the building was left with a significant amount of costly damage and had to remain out of action until repairs had been carried out.

What are the Risks? 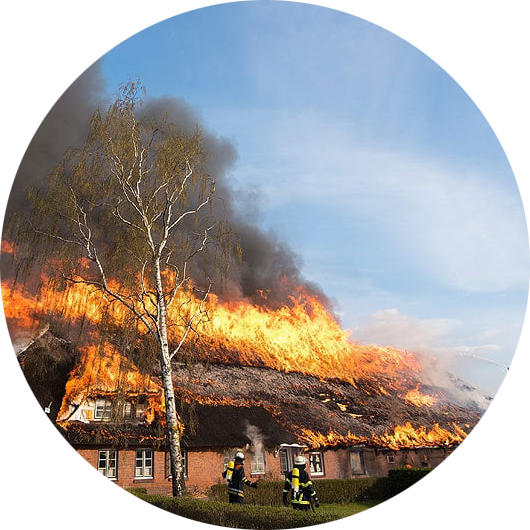 There are a number of risks associated with thatch roof properties. Although fire does not spread particularly quickly, dry thatch does burn well and fire can take a strong hold.

A large number of thatched roof fires are caused by wood burners and faulty, or ill-maintained chimneys. Sparks or flames working their way through degraded or cracked chimneys can easily ignite the surrounding thatch. Sparks from paper or burned rubbish can also ignite dry thatch on the surface around a chimney.

Thatch fires can cause extensive damage to a property, not just because of the damage to the roof, but also due to the large amounts of smoke that is produced. Therefore, all thatched roof properties should have reliable smoke detectors installed in the roof space.

What are the Challenges?

Given the nature of thatched roof buildings, traditional type smoke detectors or smoke sampling systems may be ineffective. While traditional detectors can be placed in roof voids, and in the main areas of the building, they are unable to detect the early stages of fire or provide continuous monitoring.

On top of this, thatch roofs can produce a large amount of dust and other contaminants that are left floating around roof voids, potentially rendering traditional type detectors ineffective.

Linear heat detection, such as FyreLine, can provide continuous monitoring of a thatched roof and, by installing heat sensing cable in the thatch and around the chimney, the whole roof area can be monitored for excess heat. Linear heat detectors are suitable for use in dusty environments and therefore can safely be used in dusty ceiling spaces.

FyreLine linear heat detection can detect excess heat anywhere along its length, it provides easy-to-install, fast and reliable detection and can provide an accurate location of fire.

FyrLine Digital provides fixed heat detection at rated temperatures of 68℃, 88℃, 105℃ and 185℃. FyreLine digital heat sensing cable is made up of two conductive wires that are each coated in a heat sensitive polymer and twisted together before being encased in an outer sheath. Once the polymer reaches its rated temperature it melts causing the conductive wires to come into contact with each other. The resulting electrical short sends a signal of fire, or excessive heat, to the fire alarm control panel.

FyreLine Analogue is made up of a similar construction to FyreLine digital. However, the heat sensitive polymer that its conductors are coated in causes the resistance of the cable to change as its temperature rises. This means that FyreLine Analogue is capable of detecting temperatures anywhere between 54℃ and 105℃ and can provide a two-stage warning of fire – allowing both pre-alarm and alarm conditions, thus providing the opportunity for fires to be investigated before a full alarm is triggered.

Both FyreLine linear heat detection systems are capable of providing a fast, effective and reliable fire detection solution for thatch roof properties. For more information about FyreLine Linear Heat Detection Systems, or to discuss any of the other products that Eurofyre have to offer, please feel free to get in touch either by phone on +44 (0) 1329 835 024, by email to sales@eurofyre.co.uk or via the online enquiry form situated on our contact page.